ast year, the movie Tangerine was a breakout success at the Sundance Film Festival for a small group of filmmakers who shot the full-length feature on a smartphone. But it wasn’t just a gimmick. It told a great story and was shot beautifully. Since then, lots of filmmakers have gotten smart to the idea that these phones are inexpensive and technically advanced. Which means you’ll be seeing much more smartphone features and shorts. Check out how some talented filmmakers used their LG smartphones to contribute to Everyday Spectacular, the newest video project from Joseph Gordon-Levitt. So why not get in on the trend? We’ve got some tips on giving your home movies the Hollywood touch.

Start with a story

Even if you are just filming the kids going trick or treating, you should think what story you want to tell. You’ll have a much more watchable video if you do more than just follow the kids door-to-door. For instance, get them putting on their costumes, talking about what candy they hope to get, meeting neighbors and dragging their stash home before falling asleep in a candy-induced coma. Now that’s a scary story!

If you think about story lines you’d like to capture ahead of time, your video will turn out much better than just grabbing random shots. Plus, it’s super easy to edit your video into a short piece with some simple advice from professional videographer Devin Super Tramp right here. 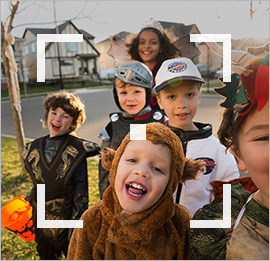 Before you even press the record button, take a look at how the picture is framed. Is the subject in the center? Does it feel like too much space is around your subject? A good rule to follow unless you are shooting landscapes is to get nice and close to your subject. You’ll get the best resolution and definition from your shot.

When setting up a shot, decide what area you want to focus on. This will make it easy for viewers to follow your story. Smartphones like the new LG V20 give you the ability to use “touch focusing” if your camera is focusing on the wrong area of your composition. 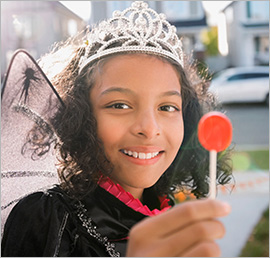 Shoot in a good light

Smartphones have smaller image sensors and lenses than their Hollywood cousins. But that doesn’t necessarily limit what they can do. Just try as much as possible to shoot your video in brightly lit areas so you don’t get shadowy or grainy video. Don’t jump back and forth between well-light and shadowy areas. And don’t aim directly at a light source unless you want a blinding light flare to interrupt things.

Steady as she goes

We’ve all tried to watch a bouncy phone video. Because of the unsteady movement it can be distorted and blurred enough to induce motion sickness. Tripods, stabilizers and camera cages are add-on items that can help steady the camera. Also look for a smartphone that has stabilization features built in, like the Steady Record 2.0 feature found on the new LG V20. No matter how you add stabilization, it’s important to zoom in and pan in a very gentle, slow motion so your video doesn’t become distracting. 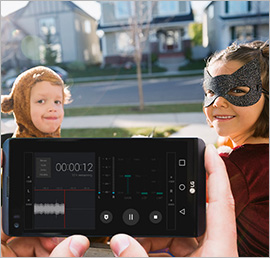 Quality audio is essential to telling a story. Many smartphones focus on the lenses and don’t use high quality built-in microphones. This can be remedied by adding an external mic. If using the built-in mic, be careful to stay out of windy or noisy areas and get as close to your audio source as possible.

Sure, just about everything on Snapchat and Instagram is shot as a vertical video. That’s fine for quick capture of content that feels homemade. But if you want anything that approaches a more professional look, then turn your smartphone sideways to capture the full scene. Some phones like the new LG V20 even have wide-angle lenses that make for an even broader, detailed view. 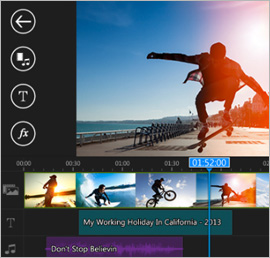 Check out the apps

There are lots of 3rd party apps that bring a more professional look to your video. Here’s some suggested ones. For just a few dollars, these highly intuitive apps can bring a whole new look to the world, making your video just that more intriguing. Be warned though. Don’t overdue it with the effects or you’ll end up with a B-movie bomb.

Obviously you don’t need much more than a smartphone to capture great video. But if you’ve added a couple of external features like a microphone or a stabilizer, then have them ready when you are going to shoot. Plus, make sure you top off the battery so you don’t have to stop shooting.

The final piece of advice is to have fun and don’t be afraid to keep shooting. It’s not like you’re wasting film – if something doesn’t work just delete it. And when you’ve captured your story, make sure and give it its own Hollywood premier. We’d suggest maybe the 65” LG OLED 4K Ultra TV and some leftover Halloween candy.

Are there any tips you might have to bring out the film auteur in others? Share them with us in the comments below.

SEE WHAT OTHERS ARE SAYING ABOUT LG MOBILE DEVICES

BE THE FIRST TO KNOW

Sign up to receive the latest news and promotions from LG