Celebrate family togetherness in the kitchen

ccording to a new nationwide study commissioned for LG, most American parents eat dinner with their children at home five days a week, while almost a third (32 percent) do this every night in a typical week, on average. The online survey of more than 800 parents of children ages 4-17 reveals that the tradition of dinnertime is becoming more prevalent, reinforcing the priority of family togetherness. 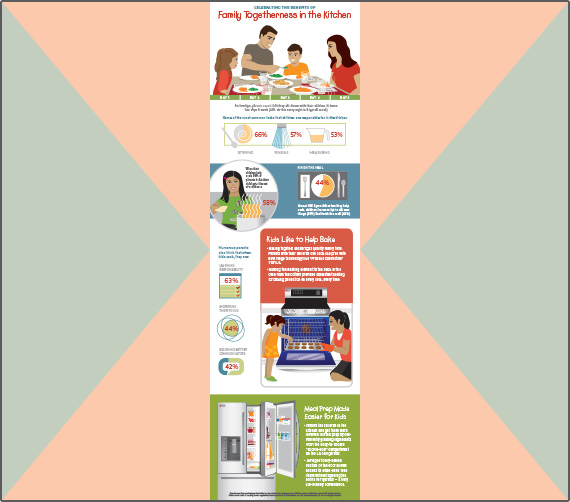 Involving kids in the kitchen to assist in the meal prep is also on the uptick, marking this as a family activity. Nearly all (93 percent) parents report that their child helps them with cooking, and over three in four (76 percent) say that this happens at least a few times a week in their households.

Helping parents in the kitchen is not just another household chore like taking out the trash or cleaning your room; it’s a fun task for everyone involved and a great opportunity for more valuable—and scarce—bonding time. Almost two in three (64 percent) parents believe that one of the benefits of children helping to prepare food at home is the ability to spend more quality time as a family.

In addition to surfacing new insights on families coming together at the dinner table, the survey also reveals a number of noteworthy benefits that children reap for their development as a result of their involvement in meal preparation, including:

• Trying New Foods: Almost half of parents agree that when their children help cook, they are more apt to eat new things (49 percent) and finish the meal (44 percent).

• Sharing Responsibilities: Some of the most common tasks that children are responsible for in the kitchen are basic activities like stirring (66 percent), rinsing (57 percent) and measuring (53 percent). Almost two-thirds of parents (63 percent) report that their kids help them clean up after the meal too.

• Feelings of Accomplishment: Most parents report that their children are proud (68 percent) or excited (64 percent) about the meal if they’ve helped to prepare it.

• Active Participation: When children help make the meal, they’re often more engaged at the family dinner table. Around four in 10 parents report that in this situation, their kids are more apt to participate in conversations during the meal (39 percent) and likely to stay longer at the table (35 percent).

• Boosting Confidence: When their children help cook, more than half of parents boast that their child gets a boost of confidence. Numerous parents also believe that when kids cook, they are learning about responsibility (63 percent), improving their focus (47 percent) and becoming better communicators (42 percent).

Children can get more actively involved in mealtime preparations thanks to LG’s refrigerators with Door-in-Door® technology, a sealed section of the door that allows easy access to often used foods and condiments. And, with LG’s line-up of microwave ovens featuring EasyClean® technology, a patented enamel coating designed to resist most stains, spills and splatters can simply be wiped off—without the use of any harmful chemicals, making it simpler and safer for kids to help with kitchen cleanup.

Do you have any favorite ways on including your kids during mealtime activities? Share yours in the comments below!

***Survey Methodology***
The independent third-party nationwide online survey was conducted by Kelton between July 27 and Aug. 4, 2015, among 820 parents of children ages 4-17. The margin of error for this survey is plus or minus 3.4 percent.